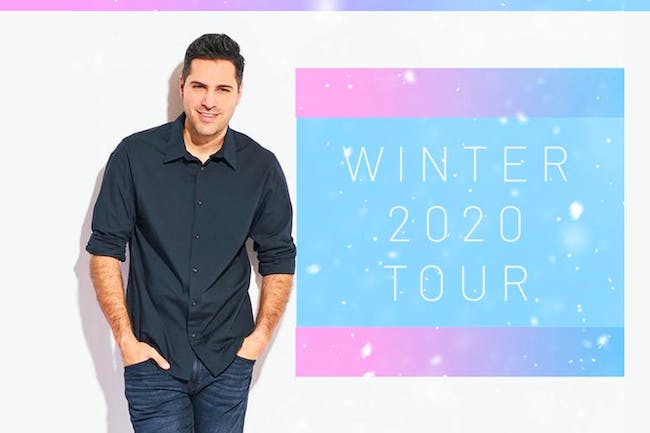 This show has been canceled. All orders will be automatically refunded.

If you purchased directly from the box office with cash or have additional questions, please contact info@jamusa.com for more information.

Danny created and hosts the hit podcast Everything Iconic with Danny Pellegrino, available on iTunes, Spotify, and everywhere else you listen to podcasts. The show has become a phenomenon since launching in late 2017. It frequently appears in the top 10 Film/TV podcasts on iTunes and has amassed over 5 million downloads just this year. Guests have included actors and celebrities like Elizabeth Olsen, Bonnie Hunt, Alyson Hannigan, Jillian Bell, Jennifer Love Hewitt, Beverly D'Angelo, Phoebe Robinson, Charlie Carver, Daniel Levy, Kristin Cavallari, and Real Housewives of every city. The show has been featured on E!, Entertainment Tonight, Refinery29, Instinct Magazine, People, Today.com, Bustle, Newsweek, and Page Six. Danny has also worked as a red carpet host and a freelance producer for E!.

Danny’s first two live shows at the Troubadour in LA and The Gramercy Theatre in New York sold out within minutes. He's performed stand-up and sketch comedy at The Laugh Factory, The Comedy Store, The Groundlings, The Second CityChicago, and the iO among others.

As an actor, Danny has appeared in the Amazon Prime show Michael and Johnno Try, the popular web series Go-Go Boy Interrupted directed by Jordan Black, and the upcoming feature film, The Stalking Fields, due out in 2020. He spent years in the role of Tony and Dominic in the popular Tony and Tina’s Wedding in Chicago.

He is the co-author of Fancy AF Cocktails via Houghton Mifflin Harcourt (due out Dec. 2019, already peaking at #4 among all book sales on Amazon based on preorders alone), and The Super Carb Diet released via St. Martin's Press. His Instagram @DannyPellegrino has over 142,000 followers and counting, and over 4 million impressions a month. His original content has also been featured on Buzzfeed, Cosmo, US Weekly, World of Wonder, People, Huffington Post, W Magazine, E!, and Comedy Central. As an influencer, he has been hired by Comedy Central, Netflix, DirecTV, FabFitFun, MTV, and others.

Danny’s burgeoning screenwriting career includes optioning his first screenplay, 8-BIT MELODY, to Valparaiso Pictures. He is currently in development with his next script, an ensemble comedy.