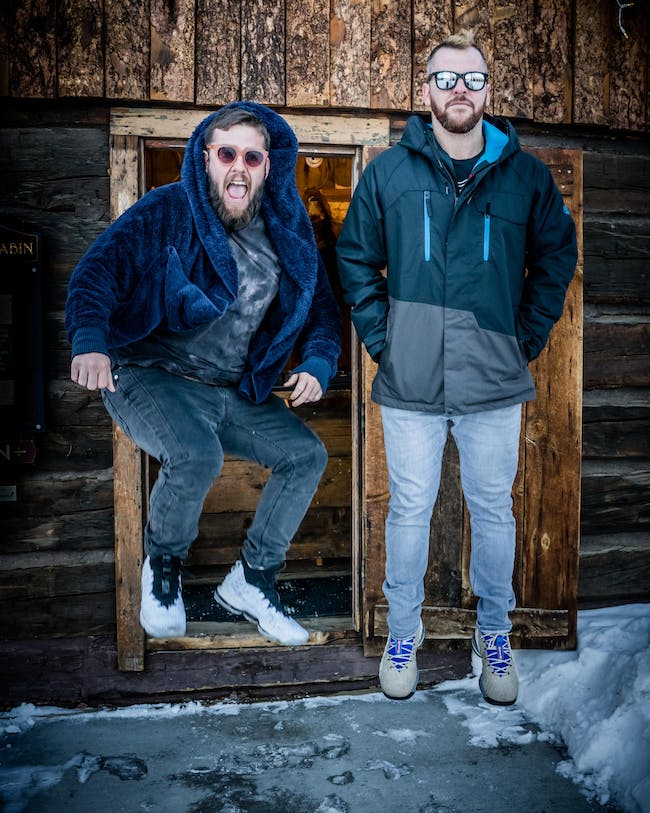 This show has been canceled. All online orders will be automatically refunded. If you purchased directly from the box office or have additional questions, please contact info@jamusa.com for more information.

Just outside the jazz mecca of Kansas City springs liberal oasis Lawrence, Kansas—separated only by the waves of wheat from the epicenter of the electronic music revolution in Colorado. From Lawrence, it would logically follow that an act could rise to prominence fueled by the swing of Basie, the birth of Charlie Parker’s bebop, and the wild frontier of electronica. Born in funk and bred in the digital age, live electronic duo The Floozies have burst onto the scene at a time when the industry needed them the most.

Brothers Matt and Mark Hill share the stage just as easily as they share a musical brain. Without a setlist, and without a word between them, Matt’s guitar is in lockstep with the thud of Mark’s kick. Endless looping and production builds the raw scenery upon which palm muted chugs, searing solos, and wobbling bass paint their dazzling array of colors.

Well versed in everything from Chris Cornell to Kavinsky, the sonic vision shared by the brothers eschews contemporary electronic influences in favor of broader, deeper tastes including Zapp & Roger, Lettuce, and Amon Tobin. That wide-angle view of a century of popular music allows the Hills to remix Toto and The Dead—in the music you can hear reverence for the giants of the past, all the while producing wildly futuristic tunes for the masses to dig now.

When the pendulum swung as far as it could away from live instrumentation to laptops, The Floozies rose up to the challenge, swinging as hard as they could in the other direction with neck-snapping, knee-breaking funk so dirty that the gatekeepers stood up, wiped themselves off, and took notice. A bold live show full of sonic exploration and unbreakably deep pocket grooves has landed the brothers on stage with luminaries of the jam world Umphrey’s McGee as readily as electronic elites STS9 and Big Gigantic. Sold out shows across the Country, huge festival appearances at Bonnaroo, Electric Forest, High Sierra, Summercamp, Wakarusa, Camp Bisco, Summerset, Bumbershoot, and headlining Red Rocks shows have continued to cement the duo’s ascent.

The Floozies are bringing the funk back, and they’re right on time.

Check out the latest from the “undisputed kings of electro funk”, 2017 album Funk Jesus.

"If you’re looking for some tunes to throw on your evening summer beach playlist, electronic funk duo The Floozies has you covered."- EDM Tunes