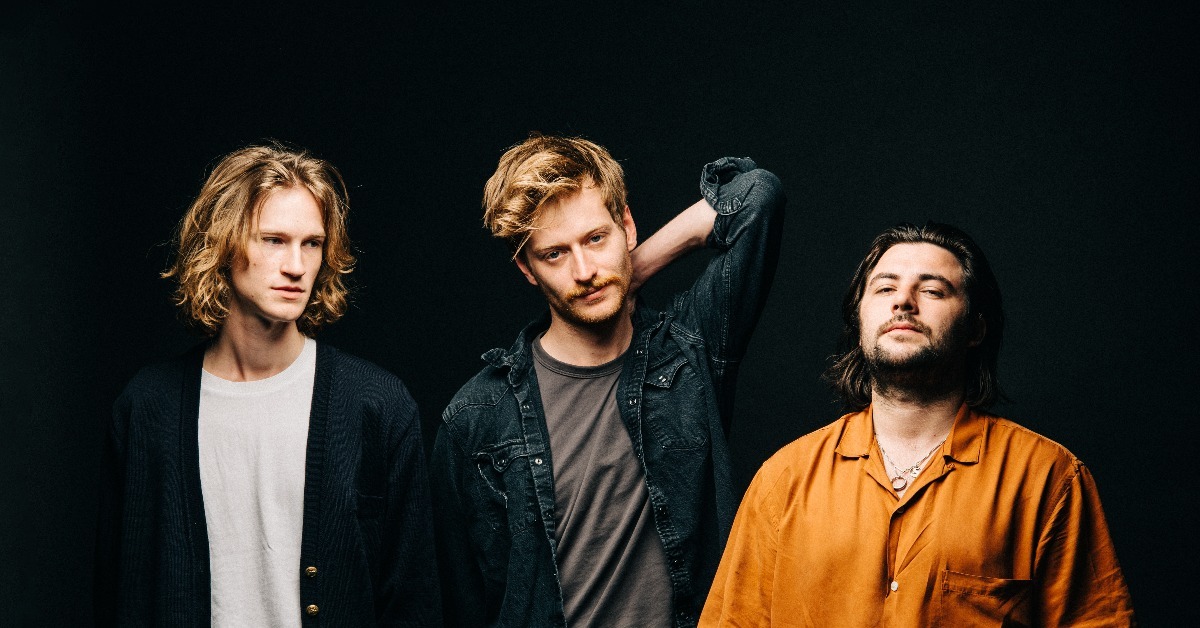 Violet Drive Tour
Doors: 7:00 PM / Show: 8:00 PM
18 & Over
Lincoln Hall
Buy Tickets
18 & Over
Apr 26, 2023
Buy Tickets
Kerala Dust’s new album ‘Violet Drive’ is a record deeply affected and influenced by its surroundings. The band, formed in London in 2016, are now based between Berlin and Zurich, and the three Brits – Edmund Kenny on vocals and electronics, keys player Harvey Grant and guitarist Lawrence Howarth – have created a deeply European album torn between the past and future.

Formed out of a growing love of electronic music mixed with a history in indie bands, Edmund started the band at a time when making electronic music on a laptop “seemed like the most sensible thing to do”. He adds: “I got really into club music and used to go to Fabric and Corsica Studios loads. I got deep into the endless repetition of all of that music, and the way that, as it repeats incessantly, things unfold on you and it almost becomes a weird sort of mantra, leaving you in a clear headspace.” These hypnotic elements are a defining force behind Kerala Dust, whose music incorporates blues and americana mixed thrillingly with untraditional electronic beats. Through playing clubs worldwide for three years after forming, they honed a somewhat improvised and always fluid live show that broke their songs away from the shackles of their recorded forms and set the stage for a band determined to break molds and keep rewriting their own script.

While releasing debut album ‘Light, West’ towards the end of 2020, the band were diving into their new base of Berlin and letting its deep, complicated history and landscapes influence their next move. During lockdown, Edmund became friends with film director Greg Blakey and spent his days roaming deserted streets and old abandoned buildings (with help from a website dedicated to identifying them, and the difficulty of which to access each one). “There’s a richness and strangeness to the history of Berlin, and how many people have occupied this space in the last 80 years,” he says. “I grew up with British history, but there’s a very different sensibility here. In Britain, we’re told that the battles and the wins of the empire are a victorious thing, even though it crumbled and a lot of it is quite a shameful history. There is a deep sense of pride for these things, whereas Germans at school get imbued with an intense, deep shame for them.

“These remnants are just standing there,” he adds. “Remnants of the wall in the middle of the city, old motorways built by the Nazis, all of these things that are left to rot because they are quite shameful. They all carry some weight of history that wasn't even too long ago, and going around and looking at those really, really informed the sound or the record.”

In a break from past ways of working, the songs on ‘Violet Drive’ were built from the drums up, and this truly stunning, off-kilter percussion defines the album; in keeping with the record’s inspirations, they often sound like a war cry. Recorded in two weeks in a studio in the Alps just outside of Zurich by Till Ostendarp, the thudding backbeat laid down provide the framework upon which the album’s lyrics and instrumentation – flashes of blues-y guitars and woozy synths, Edmund’s deliciously deep, syrupy voice – bounce off and flesh the songs out. “I'd been previously writing in quite an Americana way,” he explains, “and this record is way more central European in terms of its influences,” with German legends Can a constant touchpoint.

The universe the album inhabits is also slowly being furthered with its accompanying music videos, which have been shot around Berlin and beyond, and feel interconnected with European history. Take the visualiser for ‘Pulse VI’, which was shot on an abandoned motorway bridge that became part of the wall between East and West Berlin during the Cold War. Future videos have also been shot on an abandoned airfield that used to be a Soviet barracks and an old transformer factory in East Berlin respectively. “We've gone with a sense of a richer European history, and those divides between East and West,” Edmund reflects on the inspiration behind the album.

For Europeans, Edmund says, London has “dipped off the radar a bit,” with the greater sense of interconnectedness on the continent now more apparent in a post-Brexit world, especially for Brits living abroad. He says: “Last year we went to Prague and then Budapest and then Warsaw on a European tour. We felt this sense of actual, real interconnectedness between these cities, and this overarching European identity and sense of shared culture.” As a result, ‘Violet Drive’ became “a very, very European record”.

The sense of interrogating perceived wisdom around British and European history is at the heart of the fantastic, monumental ‘Violet Drive’, and Edmund looked to PJ Harvey’s 2011 masterpiece ‘Let England Shake’ for inspiration in how it tackles these knotty issues. “It’s melancholy, but also has a decisiveness about how to view history as well,” he says of the landmark album. “There's an insecurity there.”

For him, and through the entirety of ‘Violet Drive’, nostalgia becomes the cure for this insecurity. “You can grab the unease of looking back in some way, while also looking towards the future,” the singer says. On standout track ‘Future Visions’, the straight and grounded drums anchor the song, while swinging bass swirls among it and serves as a peek into the future, with the drums and 1960s Mellotron nodding to the past. It’s a duality that defines the album and forms the thrilling beating heart of Kerala Dust.