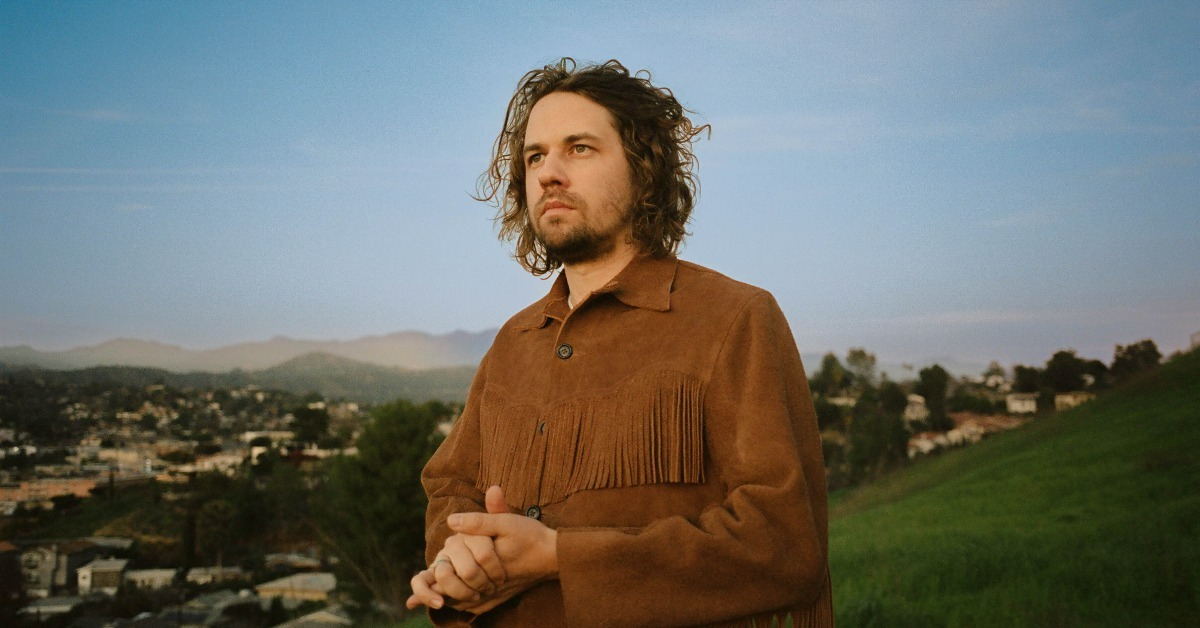 The story begins with Kevin Morby, absentmindedly flipping through a box of old family photos in the basement of his childhood home in Kansas City.
Anything to take his mind off the events of earlier that day.
Just hours before, at a family dinner, his father had collapsed in front of him at the table and had to be rushed to the hospital. Hours later, Morby still felt the shock and fear lodged in his bones.
So he gazed at the images until one of the pictures jumped out at him: his father as a young man, proud and strong and filled with confidence, posing on a lawn with his shirt off.
It was a jarring moment; remembering the frailty and loss of control he had witnessed earlier in the evening and yet seeing this portrait of great strength and confidence that resided inside the same man.
This was in January of 2020. As the months went on and the world dramatically changed around him, Morby felt an eerie similarity between his feelings of that night and the atmosphere of those spring days. Fear, anxiety, hope and resilience all churning together. The themes began twisting in his mind. History, trauma and the grand fight against time. Having the courage to dream, even while knowing the tragedy that often awaits those who dare to dream.
While his father regained his strength, Morby meditated on these ideas. And then, he headed to Memphis.

II. “If you go down to Memphis, please don't go swimming in the Mississippi River.”

He had visited the city before of course. But this trip felt different. It called to him as both a place to begin writing on these new themes and also one that could further enhance his vision. “Memphis became the representation of all of the American cities and towns I wanted to talk about. Because of all it had been through, there’s a resilience there that spoke to what we were all dealing with in different ways at the time.”
He moved into the Peabody Hotel, Room 409. The once vibrant epicenter of the downtown had a taken on a haunted quality, further underscoring Morby’s own feelings about mortality. His days were spent paying tribute and genuflecting to the dreamers he admired. On these gray afternoons, Morby would walk to the Lorraine Motel, pausing for a moment of reflection outside and then head down to the banks of the Mississippi River, to the spot where Jeff Buckley met his end. He’d wander around the neighborhood where Jay Reatard spent his last day then drive by the Stax marquee for a brief lift in his spirits. Then cruise out past Graceland, before traversing Highway 61, letting the ghosts call to him and shape his own dreams.
It was a perfectly disparate series of inspirations, all speaking to his meditations on time and what we do with the little of it that we have.
In the evening, he would return to his room and document his new ideas on a makeshift recording set-up, with just his guitar and a microphone.
The songs, elegiac in nature, befitting all he had seen, poured out of him.

To call This Is A Photograph “Americana” would not do it justice; the word having become a toothless moniker conjuring images of weather beaten flags, rustic junk and anodyne pedal steel. It ignores the grand fucked-up-ness of it all that Morby taps into. If Oh My God saw Morby getting celestial and in constant motion and Sundowner was a study in localized intent, This Is A Photograph finds Morby making an Americana paean, a visceral life and death, blood on the canvas outpouring.
There might be another songwriter who could reach at the melancholy beauty of “Bittersweet, TN” —a duet with Erin Rae that traffics in loss and nostalgia and ultimately time itself (“how does one sail on the waves of time?”) —but not one that could then evince deep sympathy in lines like “my tears in the cum rag” on “Five Easy Pieces,” just moments later. And yet, both work together: aching farewells and meditations on what we did with the time we had.
Even the album’s sweetest moments are laced with caution, with Morby imploring his lover to “stop before I cry.”
The apparitions that filled Morby’s days haunt the record; from the twisted rock and roll rave-up of “Rock Bottom” (“All of my life, oh to be anything but in the rock bottom”) to the funeral march of “A Coat Of Butterflies” (“But Jeff if you're anything like me you only care about America, where you're always in someone's wake, or you're singing while you're sinking in sand”). Tributes to dreamers past from Big Star to Stax studio legends fill out Morby’s story with allusions, but ultimately, his tale remains a personal one. As he lets us know on the album’s closing song “Goodbye to Good Times”: “Well this is a photograph, a window to the past, of a family growing old.”
It’s a record that doesn’t shy away from the confusion and sadness of the times. “It’s Over,” feels downright stark, as if the the singer was channeling all the loss in his heart and the world into one song: “It’s over, it's over now, used to take our dinner babe, by the sea, everyone was a winner then, when everyone was free.”
And yet, the signature hopefulness that has characterized all of Morby’s sonic journeys over his previous six albums remains. As he intones, on “A Random Act of Kindness,” for all of the tricks that time may play on us, the sun will rise. “Sun came up, through my hands, Sun came up, with no plan, Sun came up, strike up the band.”

Easier said than done. The logistics of getting people together safely in a room were difficult; so Morby started with a skeleton crew, befitting the times.
Once again, Sam Cohen (who had produced Singing Saw and Oh My God), helmed the project. They began in Cohen’s upstate New York studio that was still being built, along with drummer Nick Kinsey, working on the songs slowly as the journey of the recording matched the start-stop quality of 2021 itself, with magical moments sprinkled into the precarious navigations. Over time, the cast began to fill out. Former touring pianist Oliver Hill and his mother Meg and sister Charlotte provided strings. Touring compatriots Cochemea Gastelum (saxophone), Jared Samuel (organ) and Alecia Chakour (vocals, tambourine) joined the sessions as well as Eric Johnson (banjo). And new collaborators like drummer Josh Jaeger (drums, percussion), Brandee Younger (harp), Makaya McCraven (drums), Cassandra Jenkins (vocals) and Tim Heidecker and Alia Shawkat (the laughs on “Rock Bottom”) added to the developing picture.
Morby’s own field recordings of his daily pilgrimages around Memphis mark the record as well as spontaneous moments, like the whistling of a tufted titmouse that flew by the studio during the live tracking of “It’s Over.”
And fittingly, in the end, the last sessions were held live in Memphis at Sam Philip’s Recording Co., helmed by his son Jerry Philips —who reads Morby’s poem “Forever Inside A Picture”—which carries on with the legacy of the original Sun Records studio.
They worked on the song “This Is A Photograph” that last day, with recent Stax Academy of Music alumni singing the backing harmonies. Something so simple that had been so elusive over the previous year: people coming together to spend a few hours making music and helping to shape a dream. As the song played on, Morby’s voice reached a fever pitch: “this is what I'll miss about being alive.”

As Morby reminds us early on in This Is A Photograph, time is undefeated. So what do we do while we’re still here?
This is a photograph of that sense of yearning. That fight. And so, we’ll have tortuous affairs and then listen to Otis Redding. We’ll bury our dead and visit their graves and do our best to honor what they stood for. We’ll fall short, we’ll try again. We’ll toast Mickey Mantle and Tina Turner and Diane Lane. We’ll worry about those we love growing old, weak and frail. We’ll laugh until it hurts. We’ll remember our lover and how they looked all dressed up. Then we’ll go out dancing. We’ll say goodbye to old friends, sometimes for the last time. Then slide into a dream.
And then watch, as the sun rises all over again.