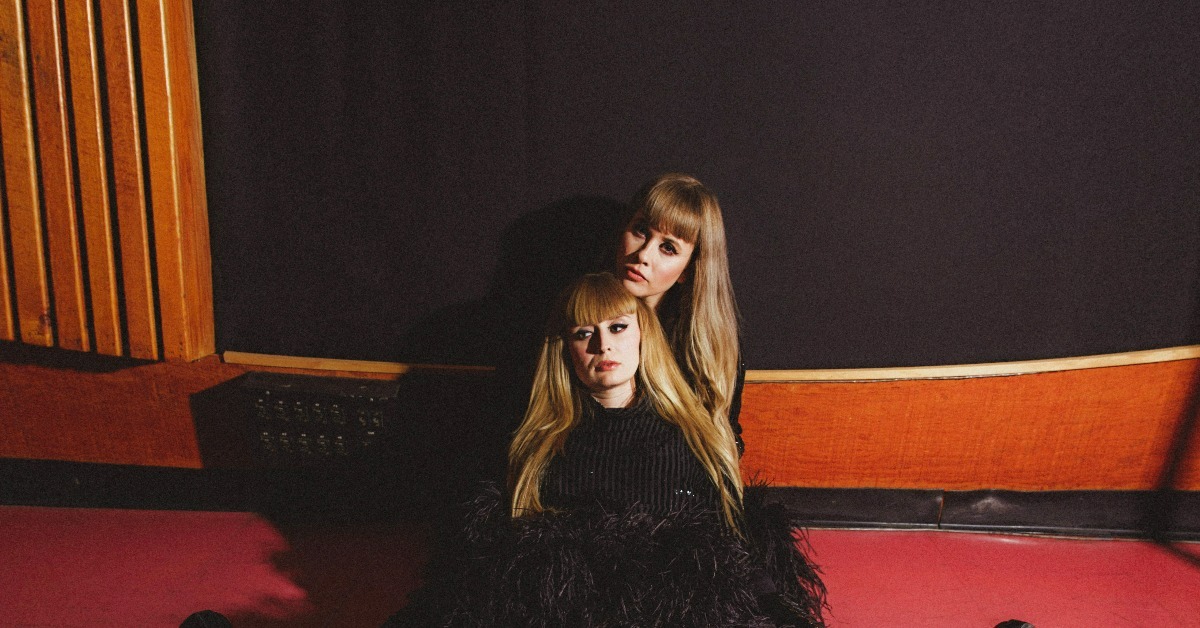 Doors: 7:00 PM / Show: 8:00 PM
18 & Over
Riviera Theatre
Buy Tickets
18 & Over
May 20, 2022
Buy Tickets
Every Lucius song begins with what Holly Laessig calls “coffee talks,” in which she and Jess Wolfe share what’s on their minds—and in the spring of 2020, they had a lot to discuss. Since 2007, Laessig and Wolfe have written this way, learning each other’s stories by heart before weaving them into the lyrics and chord progressions of their inventive indie-pop anthems. Onstage, they’re two identically-dressed and coiffed halves of the same whole, the mirror image of each other at the microphone; off-stage, they step into their respective lives—separate, but close—as chosen family. They’ve shared countless joys as they’ve seen the world while touring behind their 2013 debut album, Wildewoman, and its follow-up, 2016’s Good Grief, but they’ve weathered profound losses and lows together, too. And when one of them experiences a seismic shift that shakes their world, the other is there to listen, and reflect, in order to help write through it.

“Holly and I are actual witnesses to each other's lives,” says Wolfe. “Not only are we able to talk about these things and offer perspective, but she has this unique view into my life, and I into hers. We have been together almost constantly for the last 16 years.”

Second Nature, Lucius’ third album, is the closest thing yet to the musical versions of these intimate conversations. “We’ve gotten so used to helping each other write about very personal things,” says Laessig. “It’s funny, because Second Nature makes perfect sense as a title: it’s become second nature to write for each other. A lot of what we wrote about on the record were things we hadn’t talked about before: there wasn’t a readiness to face some of those things.”

The period between Good Grief and Second Nature is the most transformative—and tumultuous—one Lucius has faced to date. In the fall of 2016, Laessig and Wolfe, along with their bandmates, multi-instrumentalists Peter Lalish and Dan Molad, were dangerously close to burning out after three years of relentless touring behind Wildewoman and Good Grief. On top of that, Wolfe and Molad, who had married months before Wildewoman’s release in 2013, had hit a rough patch in their relationship. It was then when Roger Waters invited Laessig and Wolfe to join him on an international tour as his supporting vocalists. The benefits were clear in that urgent moment: if they said yes, this detour would give them an opportunity to explore new sounds in a musical world outside their own. It would also give Lucius the rest it desperately needed in order to survive.

“It was time to keep Lucius intact, but step away for a minute, just to get some perspective and a breath of fresh air,” says Wolfe. “We made a deal with the guys, and let them know this was only a short-term thing—something we felt that could help the band, but also give us some new-found inspiration. That turned into three years. Roger is someone who creates every moment in his mind-blowing show to be something meaningful. To take that and be able to see our own project with new eyes – well, that’s the whole purpose of learning from the people around you, your heroes. It’s to gather all of these wisdoms and put them to use for your own art.”

Their experience with Waters surpassed their wildest dreams, but they were eager to return to Los Angeles—and to Lucius, even though they were unsure as to what, exactly, they were returning to. Molad and Wolfe separated in 2018, but they remained devoted to their creative partnership, even as their marriage dissolved and ultimately ended in divorce. In spite of what was happening at home, Lucius kept working: they recorded and released Nudes, an acoustic album that reimagined previously released material and covers, and Laessig and Wolfe continued to collaborate with the world’s favorite rock and pop stars. They remained busy, but the need to write—and to put all they’d learned, and endured, into their own music—felt stronger than ever.

“People caught wind of us as supporting vocalists, and a lot of artists started inquiring if we’d sing on their records,” says Laessig, who, alongside Wolfe, recorded with Sheryl Crow, Harry Styles, Ozzy Osborne, John Legend, The War on Drugs, and Brandi Carlile, to name a few, before the close of 2019. “It was flattering and honorable to sing with so many people we've admired, but after a while, there was an urgency to get back to focusing on the record we needed to make for ourselves. Just as we were doing that, the pandemic hit.”

Co-produced by Carlile, their longtime friend, collaborator, and champion, and Dave Cobb, whose production credits have earned handfuls of Grammys and industry-wide accolades, Second Nature is a new chapter for Lucius in more ways than one. They left Los Angeles and decamped to Nashville in March of 2020, where they crashed with Crow (and wrote their first song for the album, “The Man I’ll Never Find,” on the piano in her living room). They opened themselves up to co-writing, which they’d never done before, and incorporated voices besides their own (both Carlile and Crow contributed backing vocals). Laessig and Wolfe also met separate, but substantial, inflection points while bringing Second Nature into being. Laessig became pregnant with and welcomed her first child. Wolfe and Molad, who had not seen each other since finalizing their divorce, reunited in the studio. There, they commenced with their new normal as bandmates, and proceeded to navigate these songs that were directly inspired by what they’d just lived through.

When the time came to tap into these painful conclusions and hopeful new beginnings, Laessig and Wolfe found themselves gravitating less toward the folkier inclinations of Wildewoman or the experimental urges of Good Grief to express themselves, and more towards the four-on-the-floor inclinations of dance-pop. Carlile encouraged them to push their immense vocal power to its max in order to create “grandiose” moments: “She’d say, ‘You’ve got this in you, you can push this further, let’s go for it, let’s make a thing out of this moment.’ That happened all over the record,” Laessig remembers. Cobb, mostly known for his exceptional work across country and folk, eagerly embraced the chance to direct them to the dance floor.

“Dave at one point said, ‘I wanna make a disco record!’” Laessig recalls. “The fact that was coming from him, it wasn’t something you expected, and it was exciting because it was like “Oh, we’re all gonna do this thing that we’ve never done. That sounds really enticing and fresh.’ After being in lockdown for so long, it felt like we wanted to dance. I don’t think anyone wanted to mope around too much at the end of this.’

Second Nature fuses funk and disco (which pulses through the title track and “Next to Normal”) with ‘80s new wave (“Heartbursts;” “LSD”) and millennial club catharsis (“Dance Around It”); it draws a throughline from Abba’s unabashed dance floor devotion to Kate Bush’s cerebral art-pop and the vibrant vulnerability of Robyn, all without sacrificing an ounce of Lucius’ own style and ingenuity. And though many of the melodies are synth-laden and steeped in endorphins, the lyrics are very much anchored in the uncertainty, fear, and difficult epiphanies Laessig and Wolfe faced as they wrote through their experiences—direct lines of dialogue seemingly pulled from their coffee talks. “Promises” pairs a sunny acoustic guitar line and sing-along chorus with the play-by-play of a break-up (“Promises, empty like the bed you sleep in/Broken like the spell you’re keepin’”), while “The Man I’ll Never Find” stuns with its poignant apologies (“I thought that it would be you/I wanted it to be you/And I’m sorry I was always looking for the man that I’ll never find”) as much as it does its grand, symphonic arrangement. When Molad first heard the latter, so clearly inspired by the heartbreak they shared, he told Wolfe it was the best song they’d ever written.

Many of the truths of Second Nature are hard to confront, but Lucius learned that there’s so much more to gain from facing the impossible than shying away from it—especially when you’ve got someone standing by your side through it all.

“It is a record that begs you not to sit in the difficult moments, but to dance through them,” says Wolfe. “It touches upon all these stages of grief, and some of that is breakthrough. Being able to have the full spectrum of the experience that we have had, or that I’ve had in my divorce, or that we had in lockdown, having our careers come to a halt, so to speak—I think you can really hear and feel the spectrum of emotion, and hopefully find the joy in the darkness. It does exist. That’s why we made Second Nature and why we wanted it to sound the way it did: our focus was on dancing our way through the darkness.”