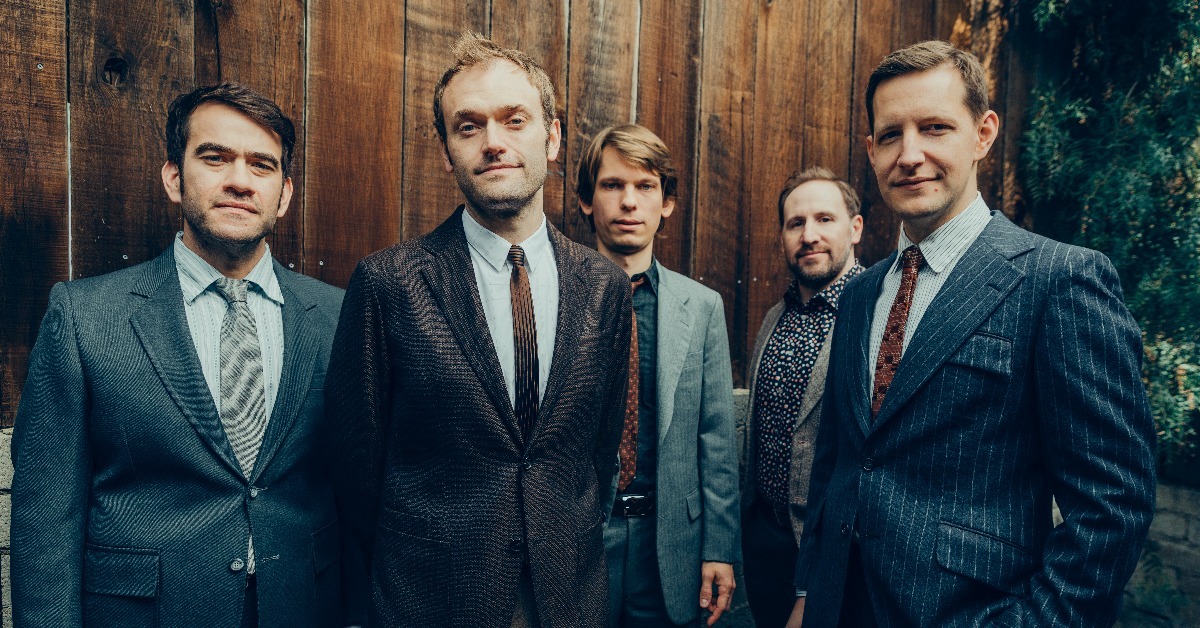 All Ashore, Punch Brothers’ fifth album and the first to be self-produced by the quintet, is both ambitious and easygoing, a lot like the “ridiculously eclectic” combo, as London’s Guardian once called the band. The work has the feel of a nine-song suite, one that invites you to unravel the threads of its connected themes and stories over repeated listening. Each track segues seamlessly, even a little sneakily, into the next. Before you know it, “The Angel of Doubt,” a dark-night-of-the-soul drama featuring a vocal from singer-mandolinist Chris Thile, has glided into “Three Dots and a Dash,” an instrumental that veers from ruminative to rave up, named in tribute to a classic Tiki cocktail, Thile’s latest recreational obsession.

Thile calls All Ashore “a meditation on committed relationships in the present day, particularly in light of the current unsettled political climate—certainly the most unsettled one that anyone in the band has ever experienced.” He continues, “We were hoping we could create a thing that would be convincing as a complete thought, sort of a nine-movement or a nine-song thought, even though it’s rangy in terms of what it’s talking about and in the characters doing the talking.”

When Punch Brothers released its last album, Phosphorescent Blues, in 2015, Rolling Stone noted, “The genius of Thile and bandmates guitar player Chris Eldridge, bassist Paul Kowert, banjo player Noam Pikelny, and fiddler Gabe Witcher is the artistry with which they mix bluegrass, roots, rock, pop, jazz, and classical to create a unique, contemporary sound.” All Ashore also has an appealingly relaxed virtuosity to it, self-assured but never showy.

In a more pronounced way than on prior discs, All Ashore comes across as a glimpse into Punch Brothers’ current real life, as these artists who have spent more than a dozen years playing together grapple with marriage, family, and their ever-accelerating individual careers as producers, composers, arrangers, and front men. On the album’s early tracks, it candidly addresses the state of their own world. In smart and satirical later songs like “Jumbo” and “All Part of The Plan,” it tackles the state of our collective one. Understated ballad “The Gardener” poignantly combines the personal and political in its evocation of a dedicated tradesman who brings beauty to a family’s garden but remains a stranger, a mysterious other, to them, only glimpsed occasionally from a window.

The five band members took time from their families to once again come together United Sound in Los Angeles (formerly Ocean Way), where they’d previously recorded Phosphorescent Blues with T Bone Burnett as well as their 2010 album, Antifogmatic. Pikelny says. “When we first got together as a band, we were mostly single guys in our mid to late twenties. We shared a musical vision but there was this sense of fraternity, of brotherhood, that really sealed the deal and laid the groundwork for a long lasting collaboration.”

He adds, “We had so much more free time than we have now, with fewer family and professional commitments. Our time together early on would happen spontaneously, casually, and often included stumbling home from cocktail bars at 3am in New York. We now have to be much more organized with our time to make sure we have opportunities to be together and make music. We’re no longer all living in the same city, three of us are married, and there are three Punch Brothers kids running around.”

Pikelny continues “On top of that, the current political and cultural situation in this country really contrasts with anything the five of us have experienced in our lifetimes. All our previous albums were made in times of relative calm, compared to the present time. But who better than your closest musical family to help navigate and makes sense of these increasingly foreign and challenging times? This album seemed like a momentous re-gathering of the band, an opportunity to really get to the core of what Punch Brothers represents. ”

Additionally, the band’s individual projects influenced them on All Ashore. “We were hearing new things out of everyone,” says violinist Witcher, “and that’s what going off and doing something else does for you. We had this whole collection of influences, new experiences, a broadening of scope.”

Thile has always juggled multiple projects throughout his career with Punch Brothers and as a member of Grammy Award-winning trio Nickel Creek. He currently hosts the public radio show, Live from Here, often abetted on stage by one or more Punch Brother. In 2017 alone, he released a duo album with jazz pianist and Nonesuch labelmate Brad Mehldau; a set of Bach trios with the cellist Yo-Yo Ma and his longtime mentor and friend, double bassist Edgar Meyer; and Thanks for Listening, a studio set of “Song of the Week” tunes he’d composed for Live from Here.

Kowert just released Unless, the debut disc with his Nashville-based quartet Hawktail produced by bandmate Eldridge and featuring frequent Live from Here guest star violinist Brittany Haas. Eldridge also recorded and toured with Julian Lage, a prodigious guitarist who melds his jazz background with folk, rock and bluegrass. In early 2017, Pikelny released a purely solo album, Universal Favorite, and toured the country extensively with his one-man show. He produced Motel Bouquet for singer-songwriter Caitlin Canty, with whom he also performs. In fall of 2017, he was again awarded Banjo Player of the Year by the International Bluegrass Music Association.

For All Ashore, instead of recording a stack of tunes out of which they would assemble an album, Witcher explains, “We decided we would write and record this album in sequence. In doing so we were really able to construct the narrative, musically and lyrically, throughout the whole process. That was a new way of doing things for us that helped the cohesiveness and narrative.”

Eldridge adds, “These songs hadn’t been played live before. They were played for the first time in the studio. When you’re doing that, you capture something, that moment of discovery—what the tune is, how it goes, ‘this is how I have to relax into this section of the tune,’ all these things that are subtle but palpable to the listener and even to your fellow bandmates as you are discovering them together. I think we captured that on tape.”

The blend of concentration and cooperation that Thile had to muster for the arduous “Song of the Week” segment of Live from Here markedly informed the making of All Ashore, notes Kowert: “Chris’s compositional chops are in peak form, having worked under constant pressure for the radio show. And it was a similar experience for all of us, in our own ways, this openness to incorporate other people’s instincts—combined with a kind of last-minute element. Thile was always walking to the writing sessions, to the rehearsals, and to the actual recording—and along the way he would be working on lyrics for the next week or even the following day. Some lyrics were written right before takes. He would present his thought from his walk to the band and we would work on it together. There was a spontaneity to the results.”

Thile agrees: “They had the confidence and the ability to articulate what might be bothering them about a particular lyric. Maybe my increased confidence as lyricist—from the radio show, which is like a compositional boot camp both musically and lyrically—gives me a level of comfort. It’s a motivating force. When I would go back to the drawing board, I’d invariably return with lyrics I was more excited about. That aspect of Punch Brothers has hit a new level. Whatever we are working on, it’s gotten deeper and resulted in greater change.”

As Eldridge says, “It feels to me that we are a better band. The irony is that we have done way less together in the last two years than we’ve ever done. There is a beautiful familiarity to having this long-term relationship, and Punch Brothers are a thing that I expect will be a part of our lives for a long, long time. It’s a lifer band. To have that ongoing relationship, to have had a decade together, with it comes this sense that we don’t need to prove anything. We are comfortable enough with what we are, what we do, to celebrate the things that are cool and unique and creative about the band. Looking at it from that angle, our only goal was to make a record that was honest and beautiful.”

“This record is a distillation the things that only we can do,” echoes Witcher. “We wanted to focus on the things that make us unique, and I think we did. And we have a more cohesive and successful record. We’ve been around for twelve years now; we know who we are.”