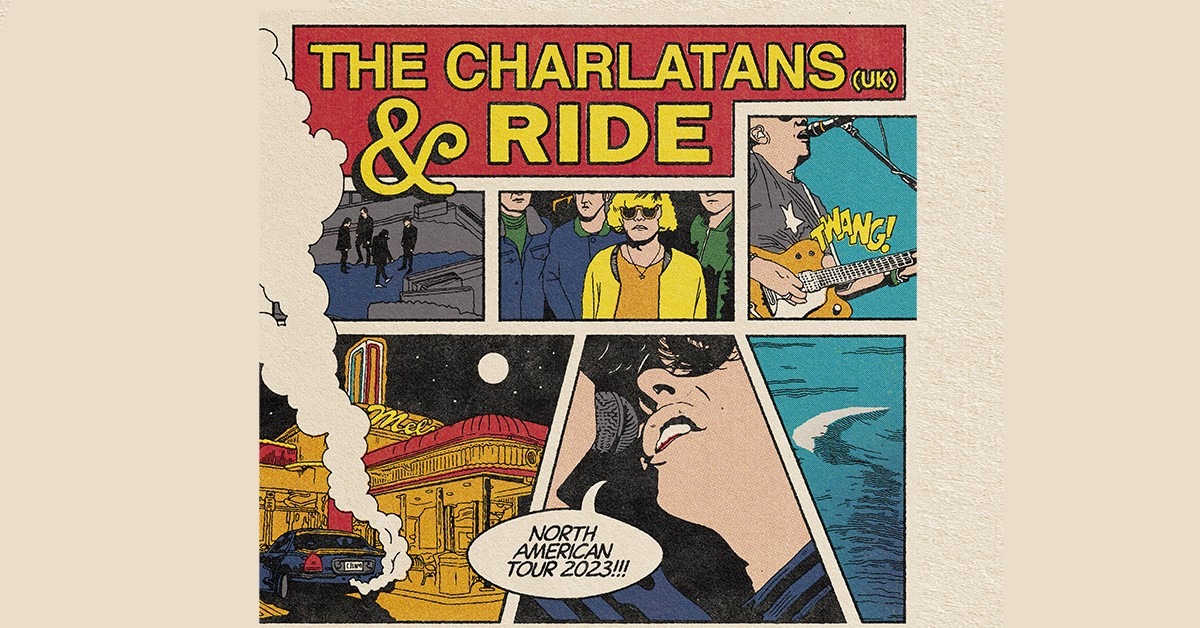 The Charlatans performing their classic sophomore album ‘Between 10th and 11th' in full, and Ride their influential debut 'Nowhere', plus many other fan favourites.

The Charlatans (UK) will be closing this show.

The Charlatans have reached a higher state of grace. Twenty-seven years since they first bagged a Number One album with ‘Some Friendly’, they’re still achieving fresh career highs, dreaming up new music that redraws their own map, increasingly assured of who they are as a band.

Their trajectory has few parallels in British rock, and it’s all set to continue with the release of ‘Different Days’, their brilliant 13th album, which finds them never more forward-looking, yet equally never more self-defining, or relevant. As Tim Burgess pointedly sings on one anthemically optimistic track called ‘There Will Be Chances’, “I laughed when I thought about the past, a place I love, but I can’t go back – the present’s where it’s at”.

Just listening to ‘Different Days’ makes you feel like a positive force has entered your life – and this, in a year when, as the title implies, the political outlook has shifted dramatically, bringing unforeseen prejudice, anxiety and division across the world. Explains Tim, “To us, the album represents an upbeat view of a world that might well be falling apart, in a time where you have to work out who your friends are, and gather them around you.”

The Charlatans’ own ever-spiralling success has itself been a triumph over adversity. After losing not one but two members (to a car crash, and a brain tumour) in their rollercoaster history, this most resilient outfit have somehow soldiered onto greater heights – a people’s band, whose embattled mortal passage through life also mirrors our own.

This time, the core surviving quartet of Burgess, bassist Martin Blunt, guitarist Mark Collins and keyboard player Tony Rogers, opened their doors to allow an enviable cast of friends to contribute to their latest work. Initially, this happened out of necessity: following the passing of founding drummer Jon Brookes in 2013, they have yet to appoint a permanent replacement. So, the first call went out to Pete Salisbury, the former Verve sticksman, who’d stepped in to help the band get up and running again on tour, through those difficult months of illness, loss and grieving.

Their last album, ‘Modern Nature’, was also made under that cloud, but had come out amazingly positively – and, indeed, modern. “It was a very soulful and cathartic record,” says Martin Blunt, The Charlatans’ founder and avatar, who has captained the band through all its ups and downs. “On previous albums, it had all got a bit fragmented, but I think we realised that what makes us, is all of us in the room together”.

Pristine and confident, ‘Modern Nature’ drew critical praise across the board, and duly notched up their eighth Top Ten on the album chart, all capped off with a lifetime achievement award from Q magazine. The Charlatans duly had a whirlwind 2015, completing two sold-out UK tours, popping up as unannounced opening act at Glastonbury, and headlining at the Isle Of Wight and Kendall Calling festivals.

Touring continued on into 2016, taking in Europe, America and Australia, but by summer, they had a preponderance of individually carved ideas for new music, and when they met up at their residential Big Mushroom HQ in Cheshire in September ’16, arrangement and recording commenced right away, without recourse to demoes. Burgess describes the process as “very conversational”, as these friends chipped away, with renewed camaraderie and egolessness.

Aside from Pete Salisbury, the first invitation into their world came on a whim, as they pinged an early version of ‘Not Forgotten’ over to Anton Newcombe from Brian Jonestown Massacre at his studio in Berlin. “Literally in the space of 15 minutes,” Mark Collins recalls, “he sent back some ideas on keyboard and guitar, and then he Facetime’d us to talk us through them”.

After that encouraging response, they decided to open the gates a little wider. “We only wanted people that we actually knew,” says Mark, “and that we could let into our world without feeling fraudulent about it.” Adds Burgess, “It’s matter of sharing it with people we love.”

Johnny Marr could easily have appeared on any Charlatans album since 1999, when the band were introduced to him by Jim Spencer, their in-house engineer at Big Mushroom. Marr dropped by for an hour, but ended up staying for five, and contributed to three tracks, including the majestic leading single, ‘Plastic Machinery’.

Similarly, Stephen Morris, the New Order and ex-Joy Division drummer, is an old friend – he briefly helped out on ‘Modern Nature’. His role this time extended further, to seven tracks. As well as playing a physical kit, he brought his savvy in programming and other digital technology. From ‘Hey Sunrise’ and the title track, through to the album’s ‘housey’ phase (‘Over Again’, ‘The Same House’, which also features his wife Gillian on keyboards), Morris’s parts lend a gleamingly futuristic dimension to The Charlatans’ endeavours.

As the spirit of collaboration prospered, Burgess fast-tracked a long-discussed team-up with Paul Weller, the expansive, Chicago soul-y album finale ‘Spinning Out’ taking shape between Big Mushroom and Wellers’ studio in Surrey. Other ‘star turns’ include congas from ACR’s Donald Johnson, and bass from his brother Derrick, on ‘Over Again’, and vocals from Sharon Horgan – yes, as in TV’s ‘Catastrophe’ – on the title track.

As The Charlatans made the final push to complete the record in the early weeks of 2017, it was all about streamlining what they had into a sequence of music that flows, a good old-fashioned journey – another of The Charlatans’ key strengths. “It starts off bright,” Tim summarizes, “then it gets dark, but after that it gets sexy”. Strengthening the sense of narrative, the band enlisted further amigos, including crime novelist Ian Rankin, Lambchop’s Kurt Wagner, and Shuri Endo (a friend of Tim’s on Twitter) to deliver spoken-word passages, binding the whole thing together.

On the ideas level, Burgess has rarely seemed more subliminally connected to the things occupying our daily thoughts. Awake every morning at 5am to greet the dawn in rural Norfolk, where he lives with his partner Nik Void (from Factory Floor, who aptly sings back-up on ‘Over Again’).

Tim was careful to exclude direct references to current affairs, which might shackle this most liberating and poetic of records to today’s political woes. “I just don’t want to spoil it by using those words,” he says. In the face of boorishness and corporate greed writ ever larger, the message in the creativity, diversity, and collective strength of ‘Different Days’ is implicit, but clear. “There are layers and layers to this record,” concludes Burgess. “It’s true to who we are. It doesn’t sound like we’re trying to be anyone else – aware of the world around us, but protective of the world we hold close.”

In the days and months ahead, its boundless positivity and invention will be a comfort to each and every bewildered listener.

One of the leading lights of the early 90's shoegaze scene, Ride reformed in 2014, releasing their first album in over 20 years in 2017. 'Weather Diaries' was produced by Erol Alkan and greeted by a raft of critical and commercial acclaim, reaching number 11 in the UK album charts. It also saw Ride reunited with Wichita Recordings' Dick Green and Mark Bowen, who worked with the band during their early years on Creation Records. The follow-up, 'This Is Not A Safe Place,' came together in a matter of weeks at the end of 2018 and start of 2019, the sound of a band embracing their new found creativity and rejuvenated dynamic. As well as working with Erol Alkan for a second time on production, their sixth record also saw Ride reunite with sound engineer Alan Moulder, who is on mixing duties for this fourth Ride record, following 'Weather Diaries,' 'Going Blank Again' and their 1990 seminal debut album 'Nowhere' (an album whose artwork is wonderfully echoed on the cover of 'This Is Not A Safe Place'). 'This Is Not A Safe Place' charted at UK #7 on release in August 2019, the band's highest chart position in 25 years.