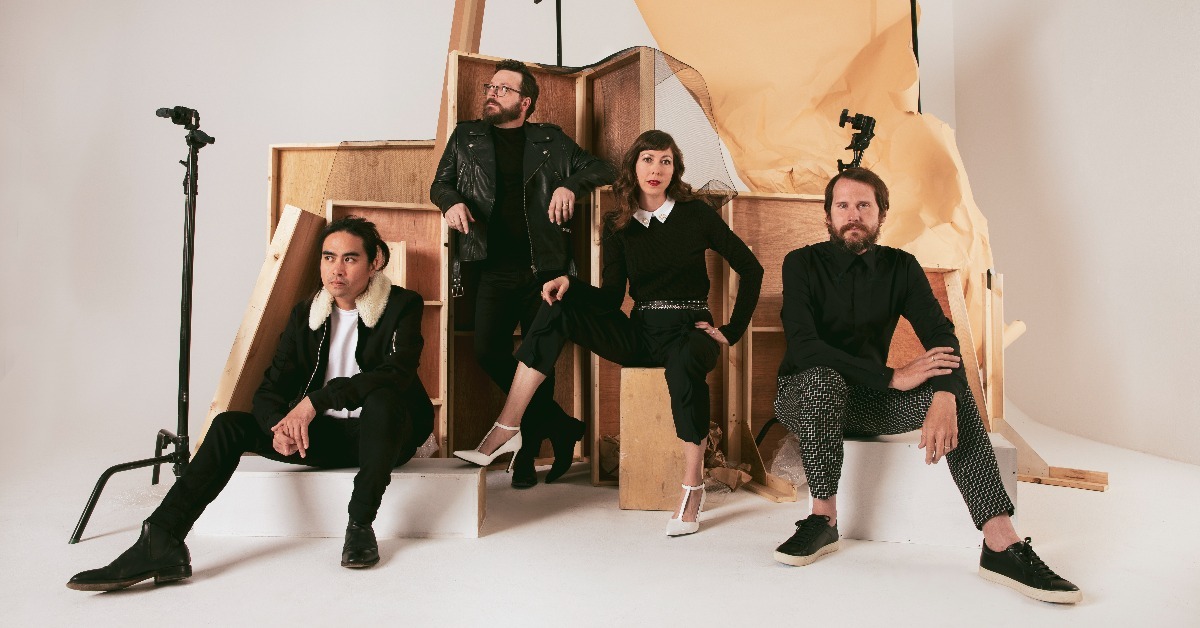 Their fifth album, Widow’s Weeds, also caters to an adventurous, patient group of listeners. Strident acoustic strumming tussles with raging electric riffs, as urgent, precise beats and moody electronic pulses percolate underneath. The band members—which, in addition to Aubert, include bassist Nikki Monninger, drummer Christopher Guanlao and keyboardist Joe Lester—were also in agreement with the album’s starting point (the urgent synth-rocker “Neon Wound”) and closer (the aggressive, throttling “We Are Chameleons”). The band admitted that everything in between, including how the rest of Widow’s Weeds was sequenced and how the album unfolded, often surprised the band.

“We didn’t know exactly which emotional level the lyrics were going to start at,” Aubert says. “I was like, ‘Are they going to be angry, with these crazy times?’ Everything seems so polarized and bizarre and scary. All of these things affect you. And then as they were coming out, it was like, ‘No, they sound like they’re kind of mourning.’ I couldn’t quite put them all together.”

To make sense of these ideas, Silversun Pickups enlisted a long-time friend: producer Butch Vig (Nirvana, Smashing Pumpkins, Sonic Youth). Incredibly enough, this was the first time the band had worked with Vig, even though the idea of collaborating had been floated for years. The timing didn’t feel right until now, Aubert says. “With the ideas that were popping around in my head, it felt like, ‘God, this would be awesome; I think it’s time. If Butch is interested in doing this at all, let’s just call him.'”

Vig and mixer Billy Bush helped Silversun Pickups craft a confident, extroverted album in which every instrument is clearly audible in the mix. Pulsing, Cure-like keyboards hold their own against slashing riffs on “Neon Wound”; antique-sounding violin and cello enhance fragile acoustic strumming on “Straw Man”; and the spring-loaded, glammy “It Doesn’t Matter Why” boasts pogoing beats and needling pizzicato plucks. The album’s more restrained moments also maintain this crispness. “Simpatico” is “the closest we’ll get to a James Bond song,” says Aubert, who immersed himself in movie scores as the album was coalescing. Widow’s Weeds strikes a perfect balance between provocative noise and distortion, and lush, introspective pop tranquility.

The band members also decided not to go overboard layering on instruments and sounds, which contributed to the album’s clearer approach. “We made a conscious effort to rein in the electronic stuff a little bit, and have more pianos and organs,” Lester says. “There’s still synthy stuff on there for sure. But we have strings again, which we hadn’t done for a couple of records. And there’s a lot less sequenced electronics. It was like, ‘Let’s strip the palette a little bit, and see what happens.’ And that goes back to the directness of things.”

Vig’s versatility and songwriting background helped the band shape other songs—including and especially “Don’t Know Yet,” on which glitchy, taut electronic textures segue into explosive choruses drive by brusque drums and noisy guitars. “It has moments of intimacy, but then it really comes alive and big-sounding,” Guanlao says of the song. “That’s all Butch. We would have probably gone a totally different direction if it wasn’t for him hearing that this once-intimate, mellow song can be really boastful and rocking.”

In the end, recording with Vig surpassed the band members’ already-high expectations. “He really listens to each band member, and he puts a great value on each individual, and what they can add to the music,” Monninger says. “It was very collaborative with him. He’s such an easygoing person, and he put everybody at ease.” That camaraderie translated into a studio environment that involved intense and serious hard work unfolding in a jovial, even lighthearted, manner. “We had a really fun time recording this album,” Guanlao says. “He really did get the best out of us. We didn’t want it to end.”

Despite the halcyon studio time, the band members were wrestling with challenges in their personal lives. The album had to be done in two separate blocks of time, since Vig had Garbage tour plans already on the calendar, which left Silversun Pickups with a break between sessions. During that gap in time, Lester’s father passed away. Aubert, meanwhile, found himself in an extremely dark place, for reasons he couldn’t immediately explain.

“We started making this album about mourning, and it’s like, ‘What are you mourning? Are you really mourning politics and stuff like that? Or what is happening?’ I didn’t realize that I was finding myself in this space where I completely tried to take on everything myself. I couldn’t ask for help; I couldn’t let anybody in. That led me to start drinking in a different way, that I never did before.”

As a result, Aubert—who was already feeling “emotionally closed off,” as he puts it—fell into a deep depression. “I didn’t know how to get out of it,” Aubert says. “Finally, I was just like, something big has to happen.” His solution was getting treatment and getting sober during the gap between recording sessions—a decision that immediately improved his mental health and creative outlook.

Unsurprisingly, Aubert also had a much different perspective on his Widow’s Weeds lyrics post-treatment, and understood more what messages he was trying to convey with the album. “The record does have a mourning vibe, but it’s not sad,” he says. “It’s change. It’s growing up, and moving on and letting go of things. And it’s okay to be sad about those things, and mourn them. It’s actually healthy to do so, and take the time to do it. At the end of the day, it’s going to be much better and much more fulfilling when you get through it.”

“When I got sober, and took a little time to myself to move as a human, we came back at the record again,” Aubert says. “Then it was like, now we’re back into the record, and writing again. It was wild. Things are really changing, and I’m starting to emotionally connect to things, and starting to take care of myself. I’m starting to ask for help.”

Aubert’s bandmates also saw an immediate change in him as they reconvened to finish Widow’s Weeds. Guanlao noticed that the vocalist was opening up to him and the rest of the band more, and allowing himself to be more vulnerable, while Monninger observed increased clarity. “I’m really proud of him for coming through all this. He focused so much on the album and put so much of his heart into it—as we all did, but especially coming out of all that, he needed something to really focus on.” Lester also saw big, positive differences in his bandmate. “It was like, ‘okay, this has actually been really good; he’s gotten stuff that has probably been bothering him for a long time sorted out.’”

In a nod to Aubert’s healthier mindset—and in a big change from past working environments—the members of Silversun Pickups welcomed friends and family into the studio as they were recording. “This was the first album where we were open,” Aubert says. “Not just with Butch, but with people around us. We played stuff for people. We never used to before. We’d play a little mixing and things like that. We were too shy.” Creating this kind of social, nurturing atmosphere added levity and accountability, and kept everyone in the band grounded. “Doing this in front of people is so much more enlightening, and really helps you focus on things,” Aubert says. “We were exposed. I see how that can be scary to people, but for us we really thrived on that.”

Widow’s Weeds ends up being about rebirth and renewal, facing darker elements of the soul (or society) head-on, and choosing to either engage—or leave them behind. This shift toward blunt candor wasn’t lost on Lester. “I feel Brian’s lyrics have gotten more direct over the last couple of records. He’s much more open and less coy about what he’s singing about. There’s less trying to put Vaseline on the lens.”

Over the years, Silversun Pickups have racked up 210 million worldwide streams and 10 Top 20 hits on Billboard‘s Alternative Songs chart, led by 2009’s ferocious chart-topper “Panic Switch.” Nearly 20 years after the band formed, it’s not lost on Monninger that they’re one of the few groups they’ve grown up with who have sustained a career. “I don’t know many bands that have lasted that long,” she says. “But we started as friends first, and we care about each other—you know, this is our second family. We really believe in what we’re doing. We’re going to take it as far as we can.”

For Aubert, moving forward involves staying connected to his own self (and remembering to prioritize self-care) and being attuned to creative impulses when they arise. If that means going outside of his comfort zone, so be it. “This album feels the most naked out of all of them,” Aubert says. “That’s scary at first. But that goes into my whole headspace. That goes into how things went down. It was like, ‘Hey man, you were so unaware of the things you needed, and so closed off. Just do it. Stop hiding. It was crushing you. Don’t be afraid.’

Covid Policy and Mask Mandate for the Vic Theatre